The Zen Master and a Little Girl 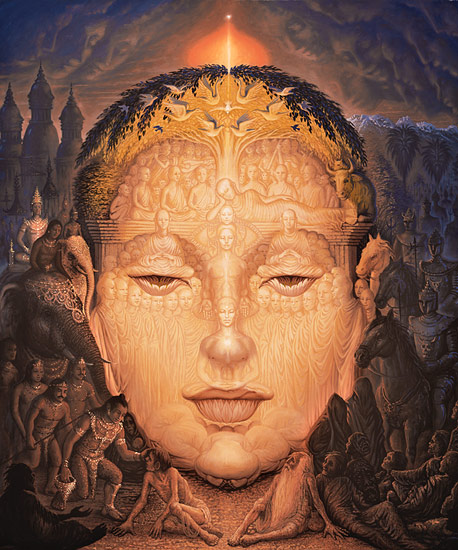 Life, birth, death are the constituent questions of philosophy. The complexity of these subjects is overwhelming and hence the explanations seldom have continuity. I came across this anecdote about a Zen master (a Japanese school of Mahayana Buddhism emphasizing the value of meditation and intuition rather than ritual worship or study of scriptures) Seung Sahn Soen-sa, which channels the knowledge into a childlike simplicity. Soen-sa recounts his conversation with Gita, the seven-year-old daughter of one of his students at the Cambridge Zen Center, after the death of the center’s beloved cat, cleverly named Katz. (“Katsu!” is a shout that is described in Chán and Zen Buddhism encounter-stories, to expose the enlightened state (Japanese: satori) of the Zen-master, and/or to induce initial enlightenment experience in a student). Katz had died after a long illness and was given a traditional Buddhist burial, but the little girl remained troubled by his death. One day, she came to the him for an explanation.

“What happened to Katzie? Where did he go?”
Soen-sa said, “Where do you come from?”
“From my mother’s belly.”
“Where does your mother come from?” Gita was silent.
Soen-sa said, “Everything in the world comes from the same one thing. It is like in a cookie factory. Many different kinds of cookies are made — lions, tigers, elephants, houses, people. They all have different shapes and different names, but they are all made from the same dough and they all taste the same. So all the different things that you see - a cat, a person, a tree, the sun, this floor - all these things are really the same.”
“What are they?”
“People give them many different names. But in themselves, they have no names. When you are thinking, all things have different names and different shapes. But when you are not thinking, all things are the same. There are no words for them. People make the words. A cat doesn’t say, ‘I am a cat.’ People say, ‘This is a cat.’ The sun doesn’t say, ‘My name is sun.’ People say, ‘This is the sun.’
So when someone asks you, ‘What is this?’, how should you answer?”
“I shouldn’t use words.”
Soen-sa said, “Very good! You shouldn’t use words. So if someone asks you, ‘What is Buddha?’, what would be a good answer?”
Gita was silent.
Soen-sa said, “Now you ask me.”
“What is Buddha?”
Soen-sa hit the floor.
Gita laughed.
Soen-sa said, “Now I ask you: What is Buddha?”
Gita hit the floor.
“What is God?”
Gita hit the floor.
“What is your mother?”
Gita hit the floor.
“What are you?”
Gita hit the floor.
“Very good! This is what all things in the world are made of. You and Buddha and God and your mother and the whole world are the same.”
Gita smiled.
Soen-sa said, “Do you have any more questions?”
“You still haven’t told me where Katz went.”
Soen-sa leaned over, looked into her eyes, and said, “You already understand.”
Gita said, “Oh!” and hit the floor very hard. Then she laughed.
Soen-sa ends the anecdote with an exchange intended to be funny, but in fact a tragic testament to contemporary Western education being a force of industrialized specialization, deliberately fragmenting the unity of all things and de-conditioning our inner wholeness:
As she was opening the door, she turned to Soen-sa and said, “But I’m not going to answer that way when I’m in school. I’m going to give regular answers!” Soen-sa laughed.


One may disagree with the explanation and have so many cross questions but there is no doubt about the strength of the single fabric answer which even a child can understand.