Things That Make Your Day: Rolling Rockets of Skate Soccer

The story of rolling rockets of 'skate soccer', the polio survivors of Ghana and their beautiful game. 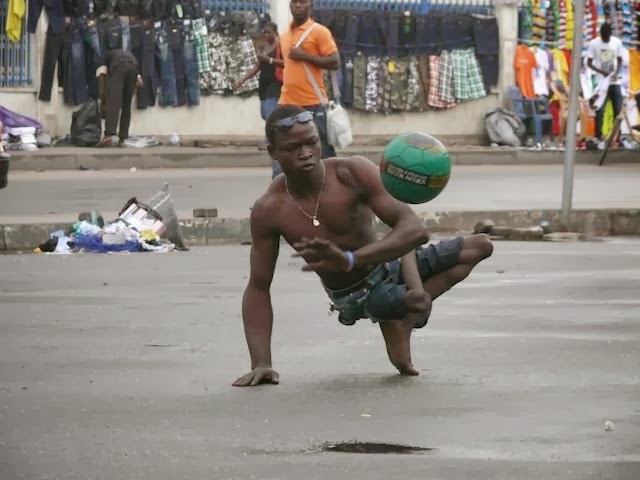 Years ago, Abdul Rahman emigrated from Suhum to Accra, with a little education and Polio in his legs, hoping to get a job. After struggling, first for a job and then for food, he resorted to begging at the popular Monsoon Food Court in the trendy uptown of Accra, hiding his face behind a cap out of embarrassment, hoping not to be identified.
Aminwu aka Smallee was born in Niger and that his where Polio caught him. In search of food and hope, he moved to Nigeria and then to Ghana, where he started to beg on roads. Moving on a wooden plank fitted with wheels, he would chase cars hoping a dime or two of mercy. The lack of hope and the inherent cynicism of life drove him into the muck that breeds in the darkness of city streets.
Rasta hails from Burkino Faso. His face oozes with experience and his wrinkles tell that he has had one of the closest looks at the world. He is a man of many talents. He can repair watches, mend electronic items and jig up a guitar as well. Like the others, he also began with a hope and ended on a wooden plank on streets running dangerously between motor cars, hoping a trickle of benevolence from the privileged.
The three of them lived with other polio survivors in Accra, with whatever families they had, all embarrassed with their beggary, resigned to the cruelty of fate and angry on the injustice meted out to them... till they were located by Albert K. Frimpong, an unemployed IT consultant and a stay-at-home dad. Albert saw these Polio survivors risking their lives everyday on the roads of Accra and decided he would do something. He had a hard time winning their trust and there was a time when they suspected him to be a police agent as well. But finally he got them to play a game which had been recently reported to be played in Nigeria - "Skate Soccer". On Sundays, he got them to arrange in divide themselves in two teams of five and play "Skate Soccer" which has been rated as one of the most adventurous sport played.
And they played...
Today, Abdul aka 'No Fear' runs a team of able-bodied street kids who work for him as car guards. He is married and has an son and a baby girl. Smallee is one of the most prolific goal scorers of the team and a party maniac. He is young, agile and passionate about the game. Rasta has a twinkle of hope in his eyes. They call themselves 'Rolling Rockets' and hope to play for Ghana someday. Albert’s dream is to get the guys off the streets through his sports program, which he hopes will decrease the stigma of being disabled and make the guys stars in their own right. He has big plans for skate soccer, one day hoping for a Skate Soccer World Cup.
Every Sunday these young polio survivors, like Rasta, Smallee and No Fear, converge on a deserted downtown taxi rank where for a few hours they can be heroes to themselves, each other and the loyal able-bodied supporters who cheer from the sidelines.
But after the game, many of these players can only look forward to the streets to rest their weary bodies. Ostracized by society, many are forced to eke out a living begging and sleeping on the streets. Come Monday they hit the streets and are a common sight, dodging traffic at the busiest and most dangerous intersections in the capital. When they do get money, some of the guys party up a storm, hanging out in bars, smoking weed and chasing women, while others do their best to support their families.
But skate soccer has given them the two most important things - self respect and hope. Skate soccer is what can easily be called the perfect cocktail of indomitable human spirit with the beautiful game.
Read more about Albert’s Sport & Youth Development Organisation here : http://www.sydoghana.org
Content collected from rollaballmovie.com (at times verbatim) and huffingtonpost.com


[ Things that make your day, as the name suggests are a series of short blogs that will be a celebration of hope, talent, love, beauty and life ]