The free verse that Suryakant Tripathi Nirala was... 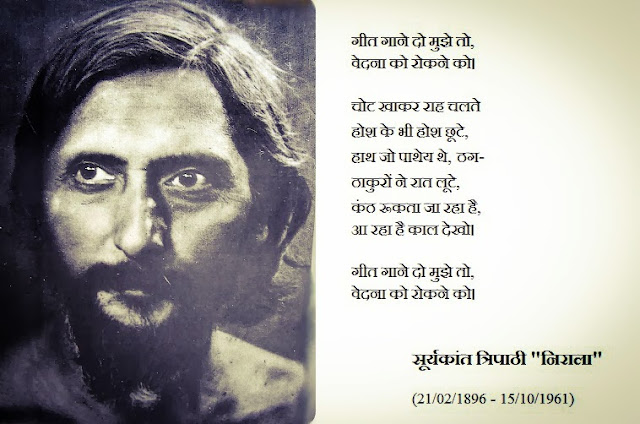 ‘Nirala’ was a fascination.


There was a poem in our Hindi syllabus - "Saroj Smriti". It was customary for our teacher to tell a lengthy biography of the poet. He believed that knowing the poet was necessary to know the poem. It narrowed the perspective and helped us see the poem from the same frame as the poet. Most of us used to take down the biographical notes as they were very useful in doing "saprasang vyakhya" (describe with context) of the verses in the poems. He started to tell about ‘Nirala’.


There were many stories, but one that remained with me, and one which summarized the essence of ‘Nirala’ was one of his encounters with Pt. Nehru. It was during a ceremony (probably in Allahabad) organized to felicitate Pt. Nehru, the contemporary prime minister of India.  The organizers invited Pt. Nehru for a speech and adorned him with a heavy garland. While he was delivering his speech, his eyes fell upon an unassuming bare chested old man with silver mane and flowing beard, dressed only in a soiled dhoti and a gamchha (cotton towel) seated in the first row. The mud on his legs and the oil on his chest and arms indicated that he had come directly from a wrestling match (which he actually had come from). Pt. Nehru recognized the man. He, then narrated a story about a wise king and his two sons. The elder one was an impatient and proud to the point of stupidity, while the younger one was benevolent and wise. When time came, the king, to everyone's surprise, anointed his elder son as the king. When his advisors asked why he did so, he told them that the younger, being the wiser, deserved more than just being a king. He should be a poet and a laureate. His elder brother will be revered, may be for his crown only in his state, but he will be worshipped everywhere and attain immortality through his poems. Saying so, Pt. Nehru descended from the dais and put that garland around Nirala's neck. And our teacher started to chant the famous sanskrit saying-


Today, 15th October, is the death anniversary of ‘Nirala’. If we read his poems, we find that it was not at all unusual of him to go bare chested in the felicitation of the prime minister. For him his own appearance or the mannerisms of the people did not matter. He lived in himself and had a kind of singular approach to every occasion. In spite of the fact that he was suspected of being suffering from schizophrenia at that time, I fully believe that he would have done the same anytime else as well. There are two reasons for this. The first one are his poems. A poet is reflected by his poems and his poems are an embodiment of freedom. In a literary world where quality was measured in metres and verse was defined by rhyme, he stood for the freedom of poetry. He wrote in free verses (mukt chhand). He had no qualms using extern words which were like burning cinders to the champions of language puritanism. He wrote in chaste Hindi, broken Hindi, local Hindi and made-up Hindi. He simply wrote in the language that the poem deserved. He was impervious to the ridicule and criticism directed at him and kept writing the way only he could.


The second reason is that there is a very high probability that those were the only two pieces of clothes that he had. He was born in a poor family and over that he was not ready to reconcile with his principles. Born in a Brahmin family, he had strong reservations against the casteism and exploitation of the lower sections of the society by high-born and richer sections. He was a poet by profession and had severe reservations about "selling" his poetry for money. From what I know he did so only under extreme hardships. Coupled with his own principles, he had an extremely tragic personal life. His wife, his only friend and companion passed away when he was only twenty. Amidst penury and heartbreak, he raised his only daughter with the help of her grandparents. She got married young but became a widow soon after. She returned back to him as his caretaker, his sole family and only reason to keep him connected to the world. As misfortune would have it, she too passed away at a very young age of eighteen. He himself has written in Saroj Smriti -


Her untimely death, capsized his hope and the boat of his connection to the material world sunk. He shunned all possessions thereafter. Whatever he had or he got in forms of awards or patronage, he distributed amongst those who needed them more than him. The publishers also had used his carefree attitude for their personal gains, paying him in dimes and making gold out of his writings. He just did not care.


Pt. Nehru, recognized this and it is said he asked the officers to ensure that a luminary like ‘Nirala’ does not live in penury. They told him that there had been attempts to give him help in form of cash or kind which he was too proud to accept and if he was awarded then he would immediately distribute the amount amongst the needy. It is hard to believe, but the then government of India passed an order that Mahadevi Verma (another great poet and one of the four pillars of Chhayavaad) would be given an amount of a hundred rupees per month (a respectable sum in those days) to take care of ‘Nirala’.


‘Nirala’ means unique and unique he was. His unbridled life and free verses have always pulled me with their mystical charm.
‘Nirala’ is a fascination and an inspiration.