The Lost Rambler: Chasing the Monsoon 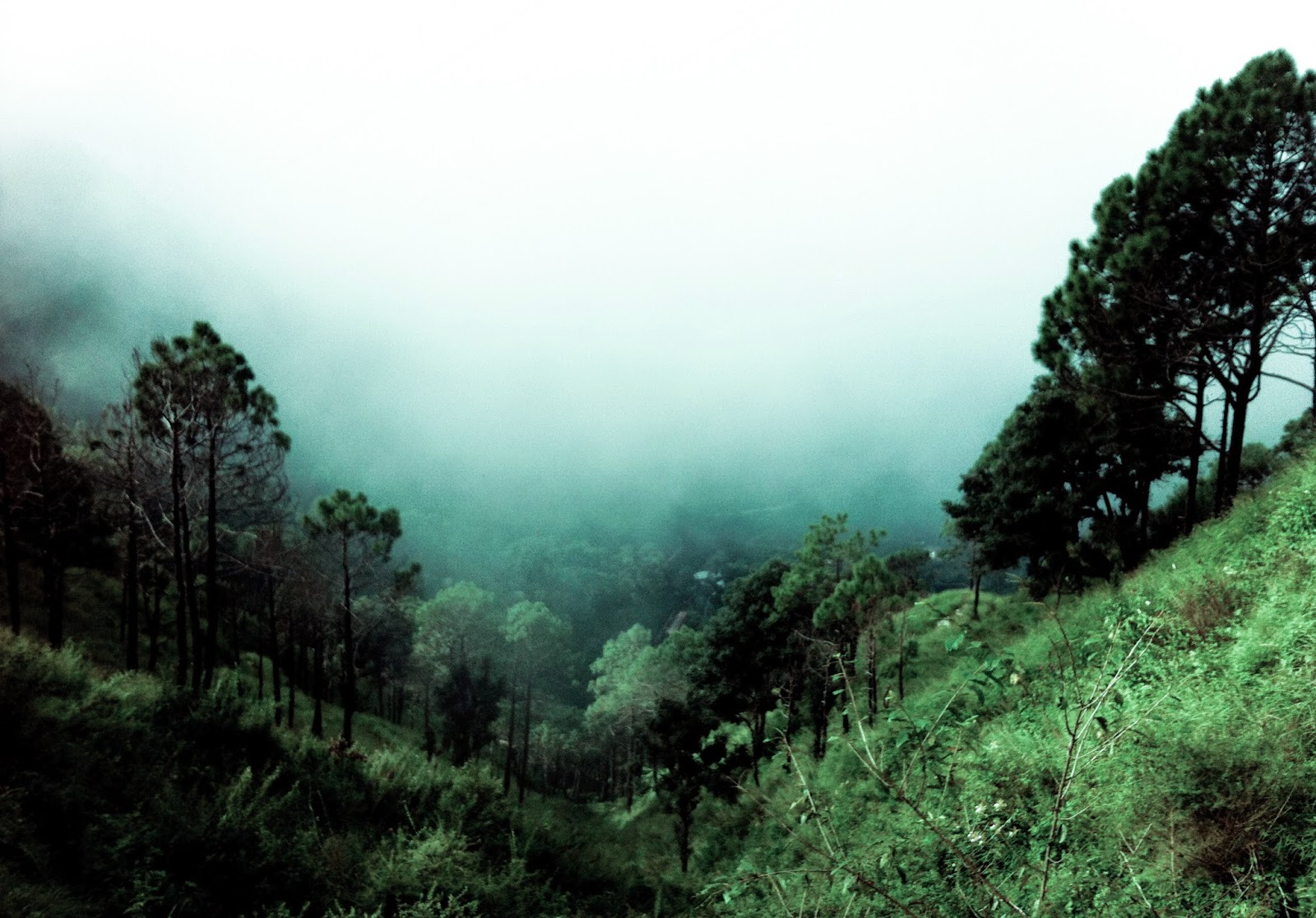 July gone, August passed and there were hardly any rains in Delhi. Mets had predicted less than par rainfall for Delhi and I was craving for monsoon showers. Sadly there were very few. So I did a little research for a place where it rains a lot in September and where I can feel alive away from this blast furnace. And the answer was in the north. The plan was set and I did not want to waste a single day in September to chase the rains into the Himalayas. I was joined by my brother Akhil, and we decided to leave for the NH 22 via NH 1 on the 1st of September. Two brothers, 1 bike, 2 light bags with the necessary accessories and clothes and with one mission “Chasing the Monsoon” we hit the road in the morning and turned towards NH 1 for a yet another memorable ride together.

The weather remained cruel until we crossed Ambala and Akhil already had his arms tanned. We kept taking breaks at every hundred km and around mid-noon we crossed Ambala and were cruising on Ambala – Chandigarh Expressway. As we took the turn towards Panchkula we could see clouds hovering over the mountains and I was dying to see them close. It felt like I was the crow from the “Thirsty Crow” story, I twisted the throttle a little more and crossed Pinjore, Kalka, had Lunch there and ascended for Kasauli. You have to take a left turn after Dharampur police station and ride on a narrow, jerky 13 kms long dilapidated road to reach Kasauli after Garkhal. Suddenly we felt the chill in the air as if it were Oct-Nov in Delhi. We reached there before the sun down and retired for the day in HPTDC hotel (Rs 485 / day) but not before hiking up to Kasauli town for food and the lovely sunset view. To our surprise there was no one else in the entire hotel. The view from the window was incredible but the night was haunting. Pitch dark mountains on one side and a barren slant road with a dim street light, under which the bike was parked, on the other. The care taker of the Hotel too was talking like the “Chaukidaar” of the “Bhoot Bangla” from the old Hindi movies. And when we asked him about how is everything around, he replied in the same runic tone – “Kuch nahi hoga sahib , so jaaiye”. We walked back to our room. We both were talking slowly as if someone were listening to us. But no one was around. Or was there someone? And when it suddenly starts raining with lightning and thunder….
We put our blankets over our heads. 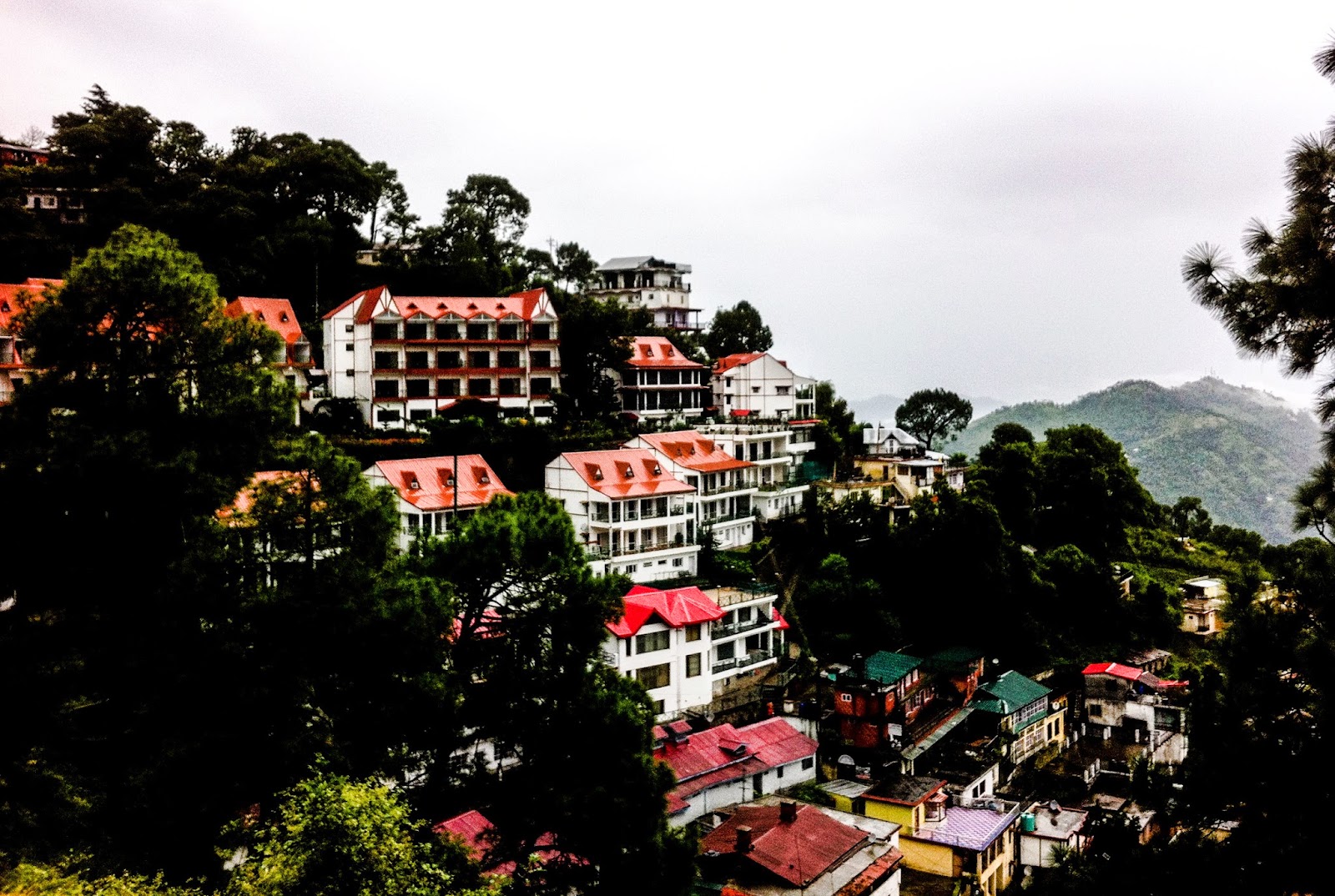 We woke up when the same caretaker brought tea for us. The rain had taken a break. We packed the bag and got ready for another two hundred km of mountain riding in a day covering Sadhupul, Chail, Kufri, Shimla and back to Kasauli. As we started it started raining again. Rains in Himalayas gives you an astounding view… it is heaven. We wasted an hour waiting for the rain to stop but then I thought, we came riding miles for rain and when it’s raining we are waiting for it to get over. So we started descending towards Dharampur again; on the bike, in the rain. After a happy breakfast in Solan, we started to climb towards Kandaghat. We were surrounded by clouds and all we could see were a few trees and drenched road through a veneer of mist. Or was it the clouds we were walking through? At Kandaghat the traffic policemen told us that the way to Chail is blocked as the Sadhupul was damaged by a truck 10 days back. He advised us to visit Sadhupul and come back as they and the administration will not be responsible if we went ahead. Sadhupul is a bridge over the river “Ashwini” twenty km right from the Kandaghat signal. People enjoy beverages, some strong and some not quite so strong, in the river with their feet running in the cold water. We started to descend on a narrow road with scant population. We reached Sadhupul and saw a bulldozer removing the debris of the bridge. We talked to the locals and decided to cross the river on our bike and move ahead to Chail. 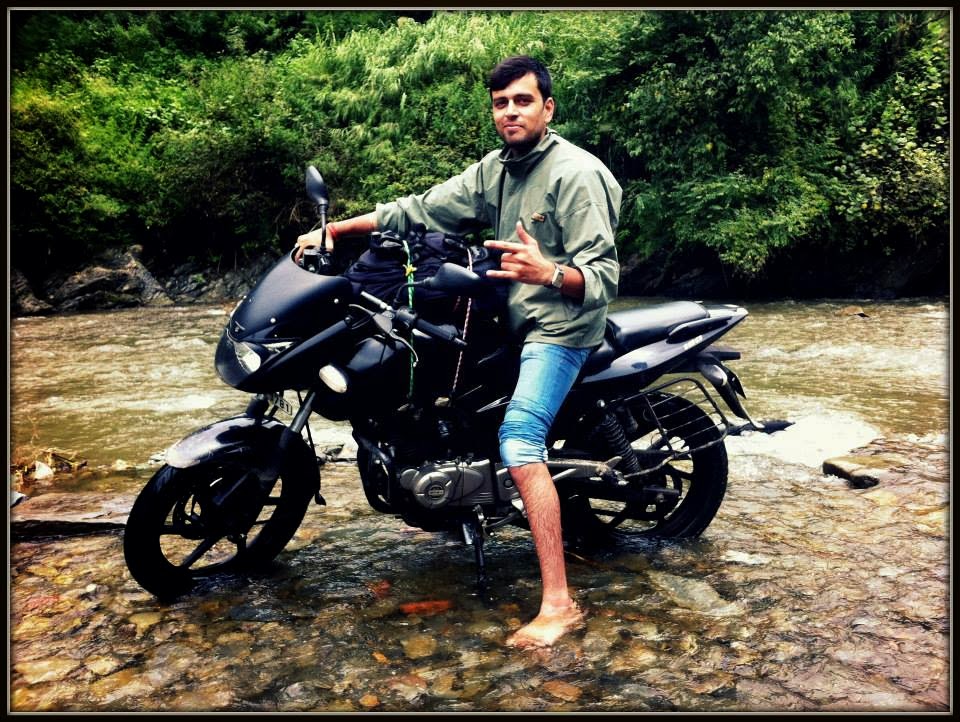 The way to Chail was mesmerizing, full of curves and steep as we were climbing from 4000 feet to 7000 feet in about only thirty km. The rain water coming down the visor and the air gushing inside our helmets gave us the sense of being alive every second. We reached Chail and the locals (we saw only three men in during the whole ride) told us to visit “Kaali ka Tibba”, the highest point in Chail. The road to the temple ahead of Chail is scary. We were greeted by a bull with “Brahmos” like horns running towards us. A narrow road, beside a steep cliff and a maddened bull! I had a lump (read b*lls) in my throat, but suddenly Akhil twisted the throttle and luckily the engine made a noise that scared the bull away. A few steps more and a very long snake slithered past us across the road. We were dumbstruck for a while. We took a deep breath and started uphill for the temple. The place was calm and serene, so different from the preposterous temples that our city lives have made us see. We spent some time there and it was already getting late by then. Sadly, we had to drop the plan to visit the world’s highest cricket ground as we had to cover Kufri, Shimla, Solan, Dharampur and those thirteen tearjerker kilometers to Kasauli, before sunset.

It was drizzling continuously as we began to climb Kufri…

The way to Kufri was surrounded by clouds and dense forests. We were wet and cold. We took a small break in the mid-way. Once you stop, you realize what Tolstoy meant when he said “In the name of God, stop a moment, cease your work, look around you”.We looked and a flurry of emotion and awe starting flowing through my mind. I wished I could stop a bit longer, but the clouds were getting darker and we had to descend as soon as possible to Shimla. We reached Shimla by night fall and parked the bike near ‘the lift’ and climbed to the Mall Road and the ridge. I was not at all excited to visit Shimla as I had been here earlier. Sadly this city, one of the most beautiful ever, is getting more and more populous and polluted every day. The once famous cleanliness and weather has deteriorated a lot. We roamed around for a while looking at the crowd and nibbling a bit here and there.
And then we moved on… in the night. 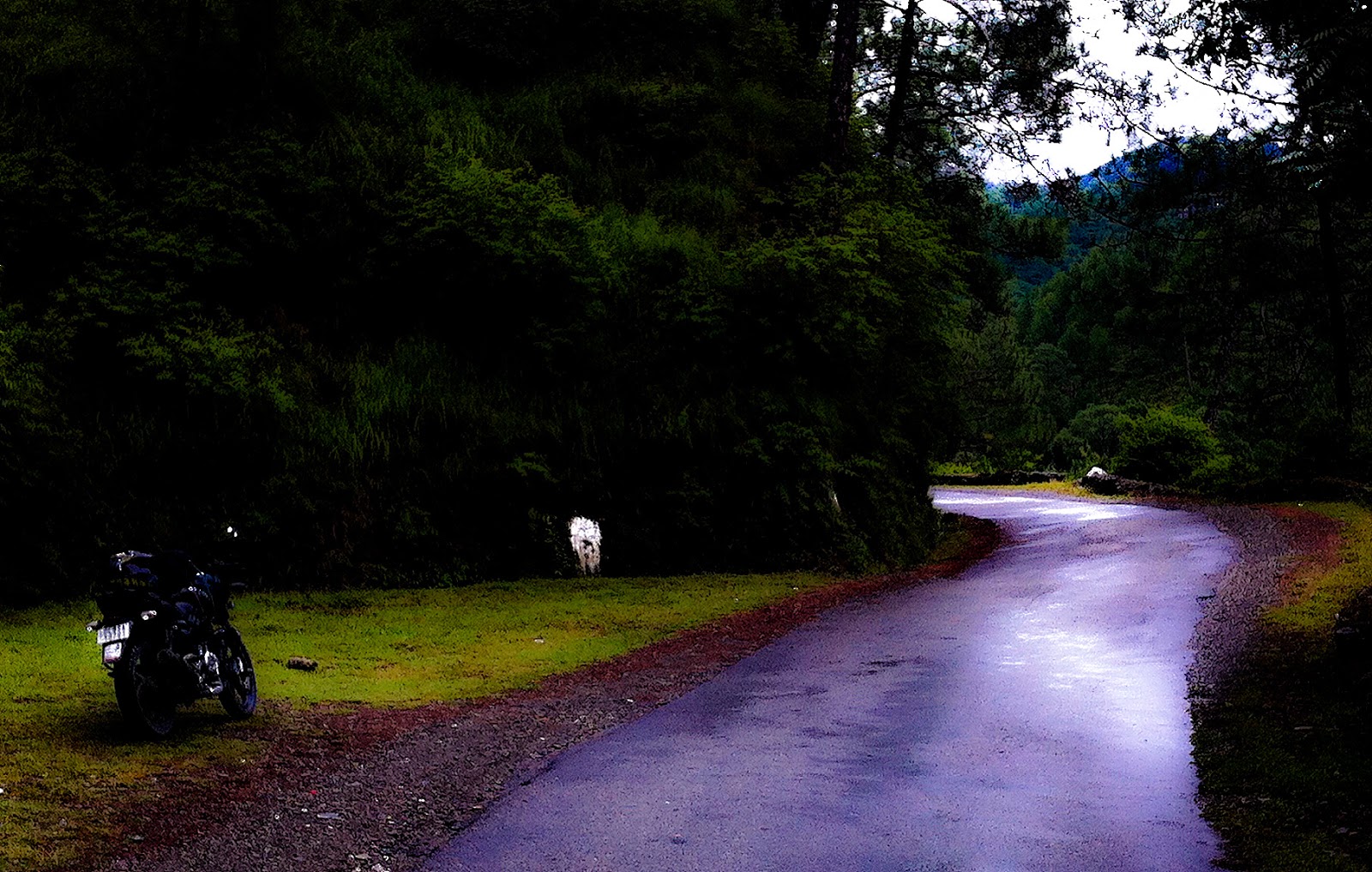 I took the wheels from Akhil, as it was getting dark. It was dark by Waknaghat and the dim headlight of my motorcycle was causing worries. The best way to ride on hills at night is to follow a vehicle ahead, while maintain a safe distance, as you can see the road and the turns in its headlight. But it gets worse when the driver ahead is drunk, speeds up and vanishes from your eyes, which is generally the case on Himachal roadways. You have to wait for another vehicle coming behind you to come forward. We finally reached back to Kasauli late in the night. By midnight we were back in the beds; tired amid the familiar but eerie silence, and a soothing chill. In all we rode over two hundred and fifty km. in the mountains. We had chased the rains and we had a full soaked experience. It was still drizzling in our sub conscious when we surrendered to our dreams..

The next morning we did some sightseeing in Kasauli, The sunset point being the best place from where you can see many cities in Punjab with a map on a cemented slab with direction pointing towards the respective cities. It was time for us to leave. Another three hundred km in heat and dust. We started in the morning, had breakfast in a beautiful hotel at Jabli, and spent some more time in the mountains. We left Himachal at noon. Akhil had the wheels and he sped away for next hundred km, without caring for me on the pillion and stopped only after crossing Punjab at a petrol pump near Shahbad. I was furious and asked him the reason for doing so. He told that he did not wanted to look back as he might take a “U” turn and go back to the hills again. Haryana was hot, and it got hotter near Kurukshetra, but as we crossed Panipat, We were greeted by the rains. We took the last set of pictures, put the phones into the bags and rode back to Delhi. That night it rained cats and dogs in Delhi. “We chased the monsoon and brought them back with us” he said to me before going to bed.

I have ridden to Himachal earlier as well. The confidence of riding on the mountains is high only when you have done it earlier. Riding on the terrains is the test of endurance to get past the pain and focus while riding. Frankly, chasing the monsoon was an excuse to ride “Into the Himalayas” again but yes it was worth it. Next time we will go further high. It is only from a height you can see how small the differences are and only past that screen of cloud and mist you meet yourself. Cheers to life and I live to ride. 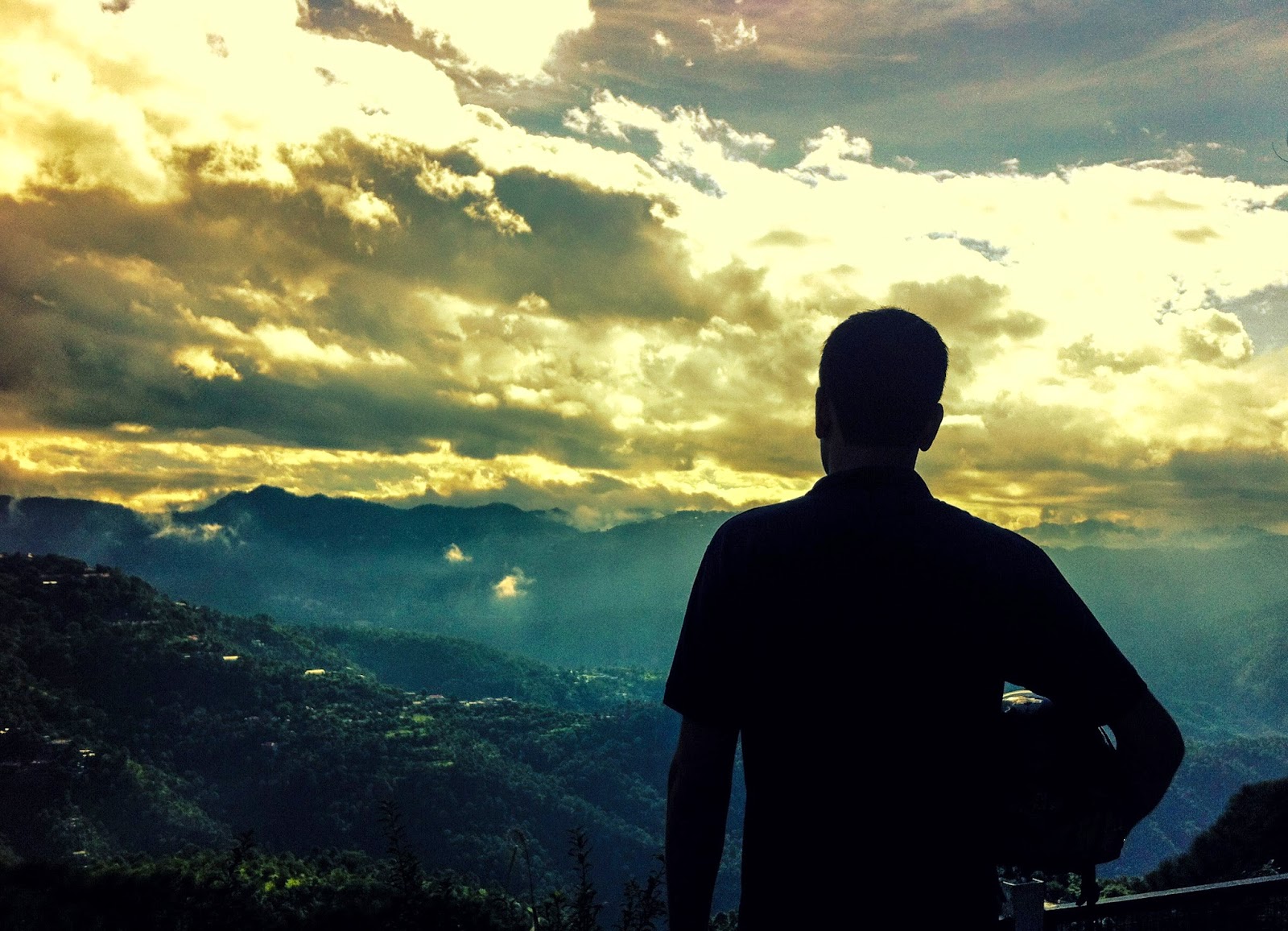 [ "The Lost Rambler" are a series of motor sports, automobile, adventure and travel posts by Nikhil Anand ]