Best Songs on Politics and Protest

Best Songs on politics and protest 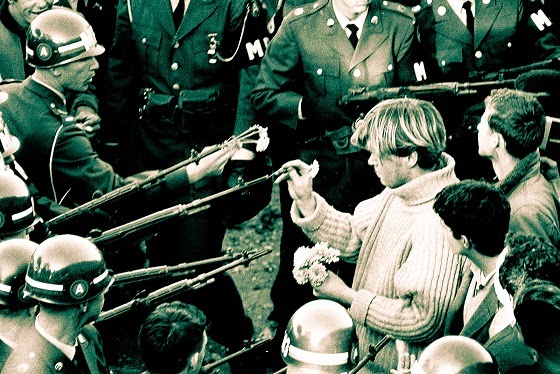 That age old and much repeated statement of Rousseau - "Man was born free but everywhere he is in chains." is more than just a cliché. For ages, the people have been ruled by governments that they chose or otherwise. For ages, decisions of human fate in wide world has been made by the whims of tea-sipping masters in cosy drawing rooms. For ages, men have sung about their protest. We at www.theblueeyedson.com set out to look for best songs about politics and protest. But as you might be wondering, there are so many songs about wars and some bands like Rage against the machine literally have a rage against the government machine in almost every song. So we decided to limit it to one song per band, pick the seminal songs that we believe stay true to the idea. Here is the list for you, with the portions of lyrics we liked the most, in no particular order (but those at the end are the best):

I Shot The Sheriff, Bob Marley

Bob Marley lived a revolution. This song has been said to mean a lot of things, like birth-control, weed, racial profiling. But whatever it means, it remains as a ringing chant against the myopic judiciary.
Freedom came my way one day
And I started out of town, yeah!
All of a sudden I saw sheriff John Brown
Aiming to shoot me down,
So I shot, I shot, I shot him down and I say:
If I am guilty I will pay.

Actually this was not a protest song when it was conceived. It was just a list of key factors that influenced Billy's generation. But this song has been kindled by all those who blame the masters of past generations for miseries falling on theirs. Has a nice 'buzz' to it as well.
We didn't start the fire,
It was always burning
Since the world's been turning.
We didn't start the fire,
No we didn't light it
But we tried to fight it

Killing in The Name, Rage Against the Machine

RATM, is the face of loud, unbridled protest... This song is about the presence of the dark elements with sinister affiliations in the government forces. The song has very few sentences, but De La Rocha's angry delivery and Morello's Guitar drives the point right.
Some of those that work forces
are the same that burn crosses
Killing in the name of...
And now you do what they told ya
Fuck you, I won't do what you tell me!

KMFDM (originally Kein Mehrheit Für Die Mitleid, loosely translated as "no pity for the majority"), is a German band which stays true to its name. Terror can be called to be its signature song that focuses on "Fundamentalist forces are undermining the integrity of liberal and democratic political structures"
Our societies are saturated with blood lust
Sensationalism and violence
As a result of alienation from one self's reality
How much longer do we tolerate mass murder

Five to One, The Doors

One of the anthems of the Vietnam War protests in America, this song is more than just the topical protest. "The song speaks more to the unfairness of class than war itself. It's the old saying about rich men making war and poor men having to fight them."
Some folks are born silver spoon in hand
Lord, don't they help themselves, oh
But when the tax men come to the door
Lord, the house look a like a rummage sale, yes
It ain't me, it ain't me
I ain't no millionaire's son,
no, no
It ain't me, it ain't me
I ain't no fortunate one, no

Wavin Flag is an anthem. Its celebratory version, popularized by Coca Cola during the Football World Cup 2010, not only brought it to the international audience but also allowed them to get familiar with the Somalian strife and struggle for independence through the original song that was "about facing the odds and coming out of darkness - despair to hope, that kind of transition and transformation."
But look how they treat us, make us believers
We fight their battles, then they deceive us


Try to control us, they couldn't hold us


'Cause we just move forward like Buffalo Soldiers
But we struggling, fighting to eat
And we wondering, when we'll be free

The song borrows its name from the idiom "pot calling the kettle black" and is a staunch take on the hypocrisy in the society and authorities. The songs wanders from the selective hypocrisy against the marijuana (which is also called pot) smokers or specially gifted indigo children or the drama done in the name of justice based on archaic laws in the kangaroo courts. This is an everybody's song, you pick you your own protest.
"Who are you to wave your finger?
So full of it
Eye balls deep in muddy waters
Fuckin' hypocrite
Liar, lawyer; mirror show me, what's the difference?
Kangaroo done hung the guilty with the innocent"

The Times They Are A Changin', Bob Dylan

Such a list would be incomplete without Papa Dylan in it. Although the whole list can be made up of only Dylan's songs, who wandered across the length and breadth of the Terra Firma, singing for peace and freedom; But this song stands out because it matches so well with the life cycle of a revolution. Initially the song appears to be celebrating the change in the order and only very late in the song you realize that "the curse, it is cast"

Faiz, is without any doubt, the greatest Urdu poet of the last century. He broke the romantic barrier of Urdu poetry and blended with the pathos of an everyday man, making his poems touch something very close to our soul. A man banished for his brilliance, by the right-wing militia of General Zia Ul Haq in Pakistan, he wrote this song when he was paraded, handcuffed in front of his beloved city. The video below is a must watch as it has the rendition of the song in Faiz's own voice as well as the eternal voice of Nayyara Noor
इनका दमसाज़ अपने सिवा कौन है
शहरे-जानाँ में अब बा-सफ़ा कौन है
दस्त-ए-क़ातिल के शायाँ रहा कौन है
रख़्ते-दिल बाँध लो दिलफ़िगारो चलो
फिर हमीं क़त्ल हो आएँ यारो चलो
आज बाज़ार में पा-ब-जौलाँ चलो

Us and Them, Pink Floyd

Enthusiasts can question why not 'Another Brick in the Wall' or 'Comfortably numb' or the whole 'Animal' album. Why this song? Because I feel, this song, like most of Pink Floyd songs, is a piece of art and a little more. It defines the chasm between "Them" who carry out carnage on pretext of difference of opinion and holier-than-thou morals and "Us" who are the ordinary men, who die in the ranks or for the want of a slice of bread...


Down and out
It can't be helped that there's a lot of it about
With, without
And who'll deny it's what the fighting's all about?
Out of the way
It's a busy day
I've got things on my mind
For the want of the price
Of tea and a slice
The old man died

Won't Get Fooled Again, The Who

One of the top rated rock songs, by the top rated bands of all time, and the song that comes closest to my personal political opinion. The song chronologically takes us through three phases of the revolution: the uprising, the siege and the failure. The beauty of this song lies in its nonchalance and a sense of stoicism towards the changes all around.
I'll tip my hat to the new constitution
Take a bow for the new revolution
Smile and grin at the change all around
Pick up my guitar and play,
Just like yesterday
Then I'll get on my knees and pray
...We don't get fooled again

A song that tops many lists, including this one as well. From the tenor, it does not seem to be a protest song, but trust me there is none as steadfast as this one. The song raises the argument without raising the voice. Every sentence, is a protest against the assumptions by which our whole life is guided
Imagine there is no heaven
It's easy if you try
No hell below us
Above us only sky
Imagine all the people
Living for today
Imagine there's no countries
It isn't hard to do
Nothing to kill or die for
And no religion, too

In a list with such illustrious names, this one may seem a little out of place. But we mention this here for two reasons: the courage that these boys in a strife-worn country have shown to raise stinging questions against a failing regime and a society that seems to care about petty things than the important ones; and because the song is actually very good.
Credits:
Wikipedia.com
Songfacts.com
Google/Bing
Ashray Mahodaya
Vaibhav Chauhan for introducing me to this form of music in general
pic: http://www.sentadofrentealmundo.com/2010/04/flower-power.html
Share on Facebook